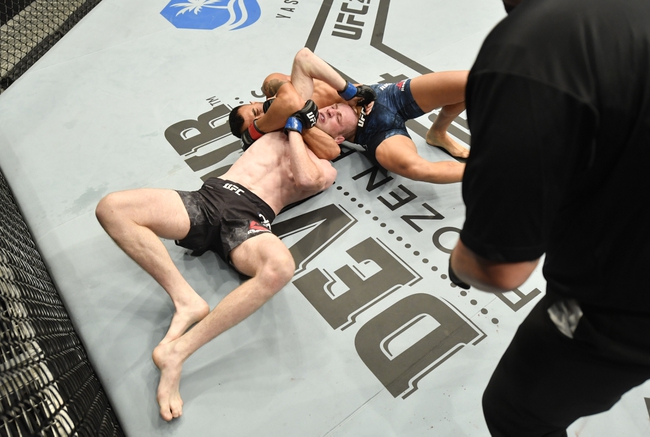 Edson Barboza enters this fight with a 20-9 record and has won 60 percent of his fights by knockout. Barboza has lost five of his last six fights and is coming off a May loss to Dan Ige. Barboza is averaging 4.08 significant strikes per minute with an accuracy percentage of 43 percent. Barboza is averaging 0.46 takedowns with an accuracy percentage of 44 percent. Barboza is coming off a split decision loss at UFC on ESPN 8 in his featherweight debut where he landed 87 total strikes, 55 precent of his significant strikes and defended three of four takedowns. Barboza has now lost three straight fights and his last two bouts have been frustrating split decision losses. Barboza is known for his leg work and is one of the best in the sport thanks to a deep kickboxing background and being a black belt in Taekwondo. You allow Barboza to stand up and fight from the outside, he’s going to pick you apart and chop your legs until you can’t move. Barboza is a black belt in Muay Thai and a brown belt in BJJ. Barboza has a high takedown defensive percentage and doesn’t take a ton of damage on the feet. At 34 years old, Barboza is a technical fighter who is what he is at this point and is going to be aggressive from start to finish with his leg kicks. This will be Barboza’s second career fight in Abu Dhabi.

Makwan Amirkhani enters this fight with a 16-4 record and has won 69 percent of his fights by submission. Amirkhani has won seven of his last nine fights and is coming off a July win over Danny Henry. Amirkhani is averaging 1.55 significant strikes per minute with an accuracy percentage of 46 percent. Amirkhani is averaging 3.45 takedowns with an accuracy percentage of 36 percent. Amirkhani is coming off a first round submission victory at UFC 251, fight where just eight total strikes were landed. Amirkhani is now 6-2 under the UFC banner and has a chance at two victories in the same calendar year for the first time since 2015. You know what you’re getting with Amirkhani, as he comes from a deep wrestling and submission wrestling background and has been highly effective with his takedowns at the UFC level. Amirkhani wants a fight on the canvas where he can gain position and eventually find a submission hold, as 11 of his 16 wins have ended with a submission, and four of those have been with the anaconda choke. However, Amirkhani also has some amateur boxing experience, so he can hold his own on his feet if needed and he’s only been knocked out once in his career. This will be Amirkhani’s second career fight in Abu Dhabi.

Barboza should be the favorite here because he simply has more ways to win the fight with his striking, takedown defense and high level BJJ. Barboza could have easily won his last two fights, so this losing stretch isn’t as bad as it seems, and he’s the longer fighter in this spot. Amirkhani is going to have a hard time getting Barboza on the canvas where he’s most comfortable. However, this is a lot of plus money with a takedown machine such as Amirkhani, who usually finishes the fight once he gets it where he wants it. Yes, Barboza is tough to takedown and his high level BJJ makes him even tougher to force in an awkward position. Barboza hasn’t been submitted since The Ultimate Fighter 22 Finale five years ago. I’m still leaning toward the big plus money and Amirkhani in the fight.

I’ll take a shot with Amirkhani.