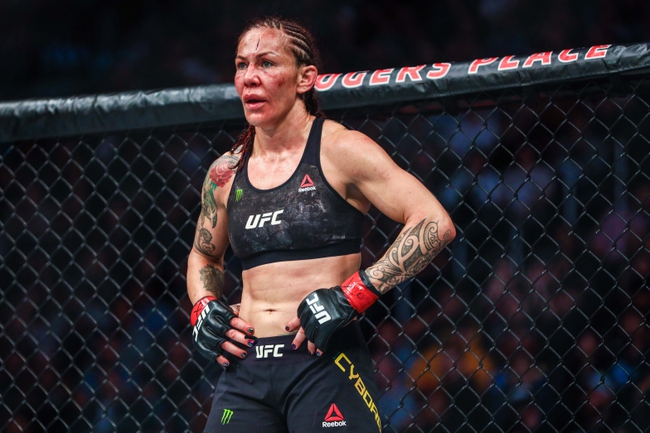 Cris Cyborg enters this fight with a 22-2 record and has won 82 percent of her fights by knockout. Cyborg has won five of her last six fights and is coming off a January win over Julia Budd. Cyborg won her Bellator debut at Bellator 238 with a fourth round knockout, her first knockout in nearly two years. Cyborg now looks for three straight wins for the first time since 2017-18 and to build a similar legacy she had over at the UFC. At now 35 years old, there’s never any surprises with Cyborg, as she’s a power striker with relentless aggression, ridiculous pop and a proven chin that allows her to stand in there and trade powerful shots. It’s not a question of if Cyborg lands those power strikes, it’s when, and there’s not many female fighters who can take such punishment. Cyborg lands her strikes standing up, in the clinch and on the ground, and she forces her opponent to fight her fight with a superb takedown defense. Cyborg is a black belt in Muay Thai and a brown belt in BJJ, and she’s very experienced in submission grappling, so she’s far from a one trick pony. Still, Cyborg is at her best on her feet where she can let her hands go early and often. This will be Cyborg’s first career fight in Connecticut.

Arlene Blencowe enters this fight with a 13-7 record and has won 54 percent of her fights by knockout. Blencowe has won six of her last seven fights and is coming off a November win over Leslie Smith. Blencowe is coming off a decision win at Bellator 233, a fight that was much closer than the judges indicated. Either way, Blencowe has now won three straight fights and four of her last six victories overall have been knockouts. Blencowe comes from a boxing background that includes eight professional fights, and she does her best work with her standup striking. Blencowe has seven career knockouts and she’s a tricky southpaw who is always moving her feet and gets in and out with her strikes. Not heavy on combinations, Blencowe picks her spots and gets out, and you’d like to see her mix in some leg kicks a little more often. Blencowe can take a punch as well, as she had some nice swelling in her last bout and didn’t stop coming forward, trading in the pocket. At 37 years old, Blencowe is still getting some notable wins and proving there’s still something left in that tank. This will be Blencowe’s first career fight in Connecticut.

Cyborg may not be as sharp as she was a few years ago, but she’s still one of the more powerful and aggressive strikers on the women’s side in all of MMA. There’s not many who can take the power or the constant pressure Cyborg brings to the octagon, and I doubt a 37-year-old Blencowe is one of the few. Blencowe wasn’t great in her last bout and she leaves herself open to damage. That’s not going to fly against a fighter like Cyborg, who also has a size and reach advantage in this fight. Blencowe has never been knocked out in her career, but that could very well change in this fight.

Give me Cyborg by knockout to shave down an expensive ML price.