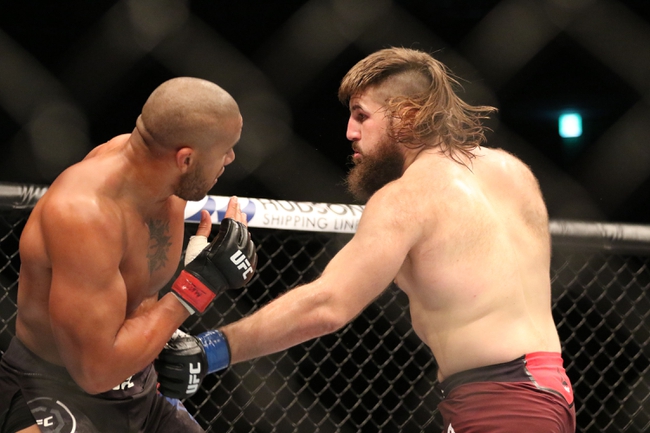 Ciryl Gane enters this fight with a 6-0 record and has won 50 percent of his fights by submission. This will be Gane’s fifth fight since 2019, and he’s coming off a December in over Tanner Boser. Gane is averaging 5.12 significant strikes per minute with an accuracy percentage of 49 percent. Gane is averaging 1.32 takedowns with an accuracy percentage of 60 percent. Gane is coming off a decision win at UFC Fight Night 165 where he landed 65 total strikes and 40 percent of his significant strikes. Gane is now 3-0 under the UFC banner, but this is easily the most time he’s been outside of the octagon since turning pro in August of 2018. Gane comes from a Muay Thai background that includes a 7-0 pro record, and his combination of athleticism, power and size makes him an intriguing fighter in this division. Gane works well behind his jab, throws powerful overhands and can be tough to pick up at times due to an awkward style. Gane does some of his best work in the clinch and his cardio is impressive for his size. Gane still has to prove he can wrestle and grapple, but up to this point he’s a dangerous and quickly rising 30-year-old out of France.

Ante Delija enters this fight with a 17-3 record and has won 41 percent of his fights by submission. Delija has won five of his last six fights and is coming off a November win over Oli Thompson. Delija will make his UFC debut in this fight and is replacing Shamil Abdurakhimov. Delija is a 30-year-old from Croatia who last fought at KSW 51 and produced a second round knockout. Delija is a strong, wild striker who throws haymakers on the feet and has a vicious ground and pound attack. Delija wastes no time the second he has a chance to finish a fight, and he does a good job of gaining top position on the ground. Delija also has seven career submission victories with four of them coming by way of the rear-naked choke, so his grappling and ground game have checked out. Delija is also 4-0 in his career in decisions, and that’s how two of his last three bouts have been decided. Delija is a wild, powerful fighter who should not be taken lightly.

Gane should be the favorite here, as he has proven himself on the bigger stages and probably has more balance to his attack. Gane is the more known and polished fighter of the two. However, Delija has powerful striking that gives him a punchers chance, and he would have the edge if this fight went to the canvas. In terms of the big plus money, there’s a case to be made for Delija in an upset. Delija is a strong striker with solid grappling skills.

You can do a lot worse than Delija and more than four times your money.