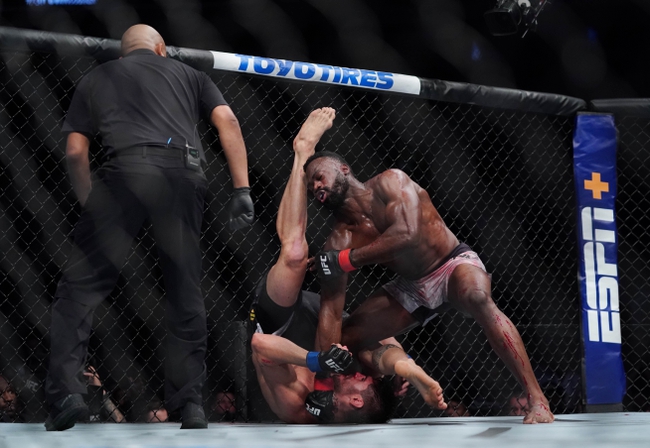 Uriah Hall enters this fight with a 15-9 record and has won 73 percent of his fights by knockout. Hall has split his last 10 fights and is coming off a September (2019) win over Antonio Carlos Junior. Hall is averaging 3.31 significant strikes per minute with an accuracy percentage of 50 percent. Hall is averaging 0.75 takedown with an accuracy percentage of 38 percent. Hall is coming off a tight split decision victory at UFC Fight Night 158 where he was the more consistent and sharper striker, but he was taken down three times, so you could have made a case for either side. It was Hall’s first decision victory since beating Thiago Santos at UFC 175. Hall now looks for three straight victories for the first time since 2013-15 and at least one win in each of the last four calendar years. Hall has had two previous bouts canceled, so he’s been out of the octagon for 13 months. There’s not many secrets with Hall, as he’s a pure striker at heart who has heavy hands with one-punch knockout potential, and he uses his knees and legs just as well. Hall is an impressive athlete who can be a bit unpredictable on his feet and is rather accurate with his shots. Hall is always one strike away from completely turning around a fight and five of his last six victories have come by knockout. A blue belt in BJJ, Hall is also a threat to end things with a solid ground and pound attack. On the other side, Hall has been knocked out in four of his nine career losses. This will be Hall’s sixth career fight in Las Vegas.

Anderson Silva enters this fight with a 34-10 record and has won 68 percent of his fights by knockout. Silva has lost six of his last eight fights and is coming off a May (2019) loss to Jared Cannonier. Silva is averaging 3.04 significant strikes per minute with an accuracy percentage of 62 percent. Silva is averaging 0.52 takedowns with an accuracy percentage of 77 percent. Silva is coming off a knockout loss at UFC 237 that looked like it could have been the end of his career, as he suffered a nasty leg injury that didn’t allow him to continue. Well, Silva is back and looking for his first victory since UFC 208 more than three years ago. At 45 years old, Silva is a shell of himself and a lot slower than he once was, which explains a lot of his recent results. However, let’s not overlook the legend just yet, as he’s still one of the most accomplished fighters in the history of the sport and has an insane fighting IQ. Silva may not be the striker or the defender he was years ago, but we’ve seen plenty of fighters survive off mental sharpness alone, and there’s no substitute for that experience. Silva is still crafty on the feet, mixes in his leg kicks well and still has above average striking defense. Silva also pushed Israel Adesanya, Daniel Cormier and Michael Bisping to decisions, so it’s not like he’s getting mopped up in these losses. This will be Silva’s 11th career fight in Las Vegas.

Anytime you can get a legend such as Silva at big plus money, you have to at least consider it. We’re talking about one of the greatest fighters of all-time, and while he’s not producing results, he’s been able to push some respectable names to decisions and hang around. With that said, Silva is simply not himself any longer at now 45 years old and he’s a lot more timid on his feet. Silva’s striking game doesn’t scare opponents the way it did 10 years ago and that makes him tough to back. Hall has a lot more left in the tank at 36 years old and there’s more pop behind his shots. You’re rooting for Silva to turn things around and find a feel good victory, but it’s hard to put money on it.

Hall should win this fight.