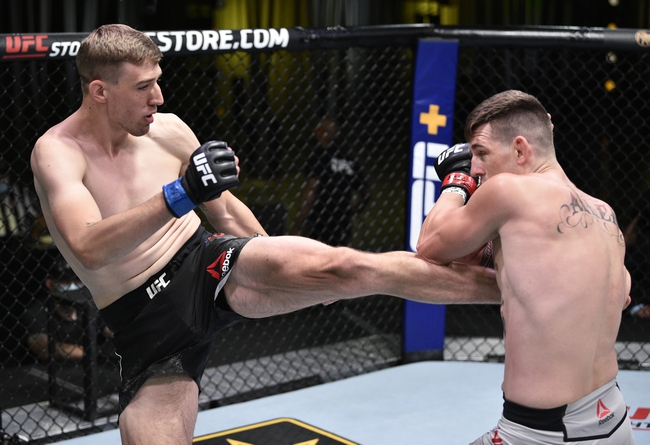 Brendan Allen enters this fight with a 15-3 record and has won 53 percent of his fights by submission. Allen has won seven straight fights and is coming off a June win over Kyle Daukaus. Allen is averaging 2.67 significant strikes per minute with an accuracy percentage of 60 percent. Allen is averaging 1.42 takedowns with an accuracy percentage of 37 percent. Allen is coming off a decision win at UFC Vegas 4 where he landed 79 total strikes and 62 percent of his significant strikes. Allen is now 4-0 under the UFC banner and looks to win his third fight of the year. Allen comes from a wrestling and boxing background, and he’s a black belt in BJJ. Allen has eight career submission victories and six of those wins have come by rear-naked choke. Allen has had decent takedown success at the UFC level and his striking can’t go unnoticed, as he puts some combinations together nicely. Allen has only been finished once in his career, and that was a submission loss in his third pro fight. This will be Allen’s third career fight in Las Vegas.

Sean Strickland enters this fight with a 21-3 record and has won 43 percent of his fights by knockout. Strickland has won six of his last eight fights and is coming off an October win over Jack Marshman. Strickland is averaging 4.64 significant strikes per minute with an accuracy percentage of 36 percent. Strickland is averaging 1.22 takedowns with an accuracy percentage of 57 percent. Strickland is coming off a decision win at UFC Vegas 12 where he landed 106 total strikes and 46 percent of his significant strikes. Strickland is now 8-3 under the UFC banner and has a chance to win two fights within two weeks, putting himself in elite company. Strickland has been a pro for more than 12 years at just 29 years old and he’s a brown belt in BJJ. Strickland is a successful takedown artist, defends takedowns well and has never been submitted in his career. Strickland took Kamaru Usman to a decision a few years ago, which is an accomplishment on his grappling and ground game. Strickland also has striking power with nine career knockouts and he’ll push the pace a bit on the feet. This will be Strickland’s second career fight in Las Vegas.

It’s always dangerous to see a fighter fight twice within such a short span, as it’s an indication he’s really feeling himself. Strickland looked great his last time out, has held his own against notable fighters in the past and has the grappling to hold his own wherever this fight goes. However, Allen has been too consistent these last couple of years to bet against, especially with these cheap prices. Allen also has the edge in BJJ and has better finish ability.

Competitive fight that could go either way, but I have to lean toward Allen.