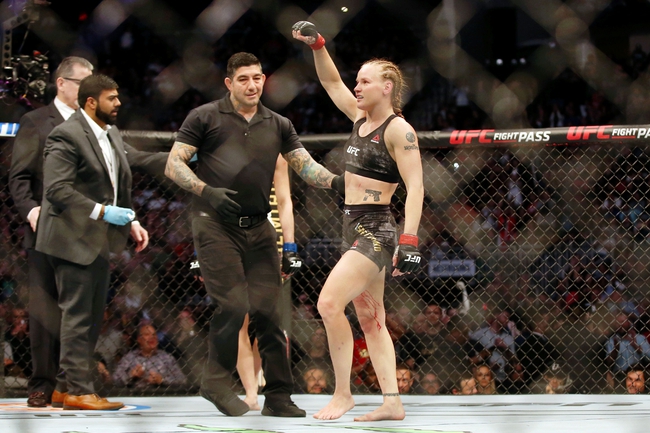 Valentina Shevchenko and Jennifer Maia fight Saturday in UFC 255 at the UFC APEX.

Valentina Shevchenko enters this fight with a 19-3 record and has won 37 percent of her fights by submission. Shevchenko has won seven of her last eight fights and is coming off a February win over Katlyn Chookagian. Shevchenko is averaging 3.06 significant strikes per minute with an accuracy percentage of 50 percent. Shevchenko is averaging 2.09 takedowns with an accuracy percentage of 54 percent. Shevchenko is coming off a third round knockout at UFC 247 where she landed 57 total strikes, 61 percent of her significant strikes and had three takedowns. Shevchenko has now successfully defended her belt three straight fights and has produced knockouts in two of those bouts. Shevchenko is arguably the most efficient striker on the women’s side, as she’s highly accurate with her attempts and has good variety thanks to her background in kickboxing and Muay Thai. Shevchenko has an impressive work rate and can overwhelm her opponent once she gets comfortable. Shevchenko is very effective with counters and knows how to close distance well that set up those leg kicks nicely. While her stand up striking is probably where she’s most comfortable, Shevchenko has seven career submissions and a black belt in Judo, so don’t sleep on her grappling and ground game. At 32 years old, Shevchenko can continue this impressive run for a while. This will be Shevchenko’s second career fight in Las Vegas.

Jennifer Maia enters this fight with a 18-6-1 record and has won 50 percent of her fights by decision. Maia has won nine of her last 11 fights and is coming off an August win over Joanne Calderwood. Maia is averaging 4.08 significant strikes per minute with an accuracy percentage of 39 percent. Maia is averaging 0.23 takedowns with an accuracy percentage of 50 percent. Maia is coming off a first round submission win at UFC Fight Night 173 that earned performance of the night honors. Maia is now 3-2 under the UFC banner and three of her five career submission wins have come by the armbar. Maia comes from a boxing background that includes three pro fights, and she’s a black belt in BJJ. Maia wants a fight on her feet where she can let her hands go, and she’s usually the aggressor in her bouts. However, Maia has shown great takedown ability in her last few fights and has a knack for finishing bouts on the ground. Eight of Maia’s last nine fights have gone the distance. This will be Maia’s third career fight in Las Vegas.

Maia is not a pushover by any means, as she has high level BJJ, she has some pop in her hands and has been successful with her takedown attempts. While a 3-2 record in the UFC doesn’t necessarily scream title shot, Maia is no slouch and can put up a fight here. With all that said, there’s no betting against Shevchenko, and all this matchup really shows is that the UFC is running out of opponents in this weightclass. Shevchenko has the edge anywhere this fight goes and the power in her strikes is something Maia hasn’t seen yet.

Shevchenko is the only option here, and I obviously take her to finish the fight to shave down a ridiculous price.