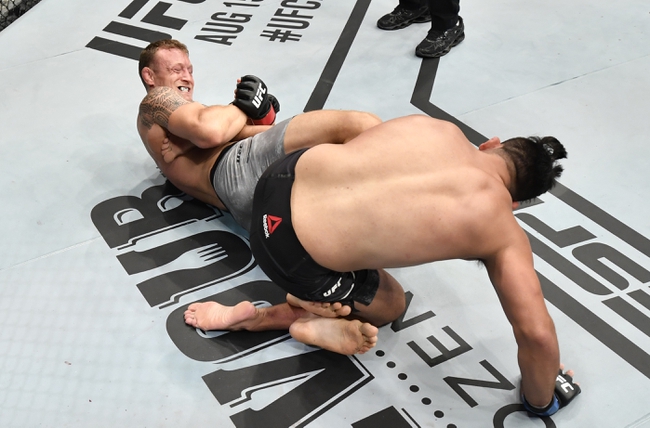 Marvin Vettori enters this fight with a 15-4-1 record and has won 60 percent of his fights by submission. Vettori has won seven of his last 10 fights and is coming off a June win over Karl Roberson. Vettori is averaging 4.33 significant strikes per minute with an accuracy percentage of 43 percent. Vettori is averaging 1.67 takedowns with an accuracy percentage of 47 percent. Vettori is coming off a first round submission win at UFC Vegas 2 that earned performance of the night. Vettori has won each of his last three fights, and he’s coming off his first finish since UFC 202. Vettori is a balanced fighter who could soon become a star given that he’s only 27 years old. Vettori is highly skilled on his feet where he throws violent combinations, but he’s also quite an athlete for his size and loves to throw knees out of nowhere, which we saw against Omari Akhmedov. Vettori is also highly effective in the clinch and has good scrambling skills that allow him to survive on the canvas. Three of Vettori’s last four submission victories have come via the guillotine choke. This will be Vettori’s fifth career fight in Las Vegas.

Vettori is a tricky southpaw striker who probably has the edge on the feet and has enough BJJ to hold his own on the ground. However, Hermansson is just one of those grizzly veterans who doesn’t beat himself and is a nightmare on the ground. Hermansson is somebody I look to back whenever getting the plus money, as you know you’re going to get an honest effort.

Give me Hermansson and the plus money.