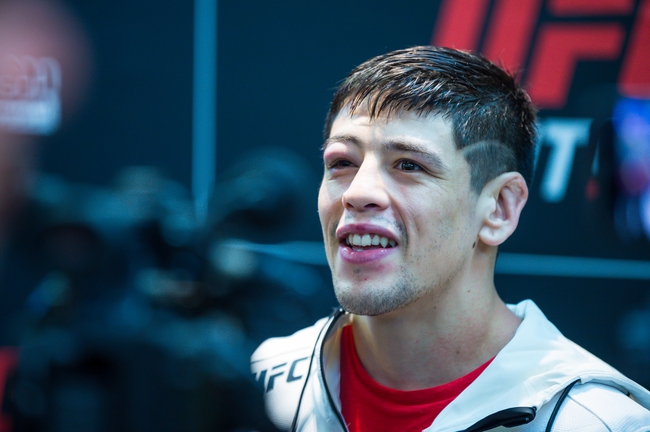 Deiveson Figueiredo and Brandon Moreno fight Saturday in UFC 256 at the UFC APEX.

Deiveson Figueiredo enters this fight with a 20-1 record and has won 45 percent of his fights by knockout. Figueiredo has won his last five fights and is coming off a November win over Alex Perez. Figueiredo is averaging 2.79 significant strikes per minute with an accuracy percentage of 55 percent. Figueiredo is averaging 1.68 takedowns with an accuracy percentage of 50 percent. Figueiredo is coming off a first round submission win at UFC 255 where he defended his Flyweight Championship for the second time. Figueiredo has produced first round submission wins in three of his last four fights and has a chance to win four fights this year. Figueiredo is a balanced fighter who has great takedown ability, can fight from his back and is quite slippery on the canvas with his scrambling skills. Figueiredo has solid wrestling and has eight career submissions with five of them coming via guillotine choke. Figueiredo is also skilled on the feet with knockout power and solid head movement that make it tough for an opponent to land cleanly. Turning 33 years old next week, Figueiredo has more than proven he’s one of the best and possibly most underrated fighter in the sport currently. This will be Figueiredo’s second career fight in Las Vegas.

Brandon Moreno enters this fight with a 18-5-1 record and has won 56 percent of his fights by submission. Moreno has won seven of his last 10 fights and is coming off a November win over Brandon Royval. Moreno is averaging 3.01 significant strikes per minute with an accuracy percentage of 35 percent. Moreno is averaging 1.93 takedowns with an accuracy percentage of 44 percent. Moreno is coming off a first round knockout at UFC 255 where he landed 53 total strikes, 47 percent of his significant strikes and had two takedowns. Moreno looks to win his fourth fight in a row and the third fight this year. Moreno is an energetic, tough Mexican fighter who won’t get outworked in the octagon. Moreno is a brown belt in BJJ, has 10 career submission wins and his scrambling ability is as good as it gets in this division. Moreno can reverse position quickly and does a good job of fighting the hands in his takedown defense. Moreno has also improved his striking over the years and has shown he can trade on the feet if needed. Moreno has never been finished in his career. This will be Moreno’s fourth career fight in Las Vegas.

It’s hard to bet against Figueiredo with the way he’s looked this year and his striking is cleaner of the two. However, Moreno has the scrambling and submission game to give Figueiredo all he can handle in the clinch or on the ground. Moreno has also become a much more confident striker lately and he has a two-inch reach advantage. With Moreno’s heart and the fact he’s never been finished in his career, he’s more than a live dog in this spot.

I’ll take a shot with Moreno and the plus money.