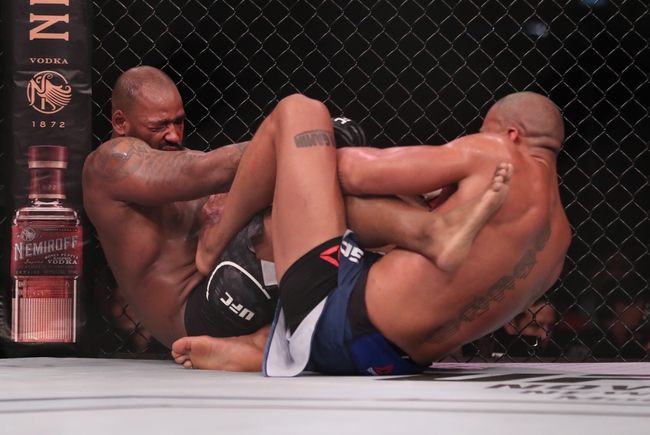 Junior dos Santos enters this fight with a 21-8 record and has won 71 percent of his fights by knockout. dos Santos has split his last 10 fights and is coming off a August loss to Jairzinho Rozenstruik. dos Santos is averaging 4.59 significant strikes per minute with an accuracy percentage of 48 percent. dos Santos is averaging 0.31 takedowns with an accuracy percentage of 55 percent. dos Santos is coming off a second round knockout loss at UFC 252, and he’s now been knocked out in each of his last three losses. This will be dos Santos’ third time fighting this year, and he’s kind of in a must win spot as he approaches 37 years old and is taking a lot of damage. dos Santos is one of the best boxers in the heavyweight division with terrific technique and still enough power for his opponent to respect. dos Santos also has more variety to his stand up, as he’ll mix in some spinning back kicks and isn’t afraid to work the body rather than head hunt for the quick finish. dos Santos is also a black belt in BJJ, so his ground game can’t be overlooked, and he does have one career submission win, which came in his second pro fight more than 14 years ago. While many would say he’s past his prime, dos Santos is still one of the best to ever step in the octagon and can’t be overlooked despite this recent stretch. This will be Khabib’s sixth career fight in Las Vegas.

Ciryl Gane enters this fight with a 6-0 record and has won 50 percent of his fights by submission. This will be Gane’s fifth fight since 2019, and he’s coming off a December (2019) win over Tanner Boser. Gane is averaging 5.12 significant strikes per minute with an accuracy percentage of 49 percent. Gane is averaging 1.32 takedowns with an accuracy percentage of 60 percent. Gane was supposed to fight at UFC Fight Night 180, but the bout was canceled due to contract issues involving the PFL. Gane is coming off a decision win at UFC Fight Night 165 where he landed 65 total strikes and 40 percent of his significant strikes. Gane is 3-0 under the UFC banner, but this is easily the most time he’s been outside of the octagon since turning pro in August of 2018. Gane comes from a Muay Thai background that includes a 7-0 pro record, and his combination of athleticism, power and size makes him an intriguing fighter in this division. Gane works well behind his jab, throws powerful overhands and can be tough to pick up at times due to an awkward style. Gane does some of his best work in the clinch and his cardio is impressive for his size. Gane still has to prove he can wrestle and grapple, but up to this point he’s a dangerous and quickly rising 30-year-old out of France. This will be Gane’s first career fight in the United States.

I’ve been trying to find value in dos Santos during this losing streak, as it’s natural to take shots at the big plus money with one of the best to ever do it. However, at some point we have to admit that dos Santos has lost a step or two, he’s getting slower and he’s taken a lot of punishment this year. Gane is naturally the bigger fighter in this bout, he has clean standup striking and his takedown ability despite limited MMA experience is impressive. Gane should win this fight given how dos Santos looks at the moment.

I’ll also take Gane to finish this fight, giving us a much better price.