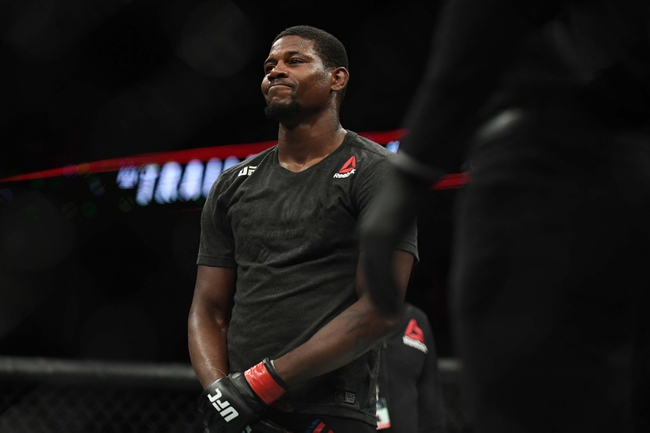 Kevin Holland and Ronaldo Souza fight Saturday in UFC 256 at the UFC APEX.

Kevin Holland enters this fight with a 20-5 record and has won 50 percent of his fights by knockout. Holland has won seven of his last eight fights and is coming off an October win over Charlie Ontiveros. Holland is averaging 4.68 significant strikes per minute with an accuracy percentage of 56 percent. Holland is averaging 1.21 takedowns with an accuracy percentage of 42 percent. Holland is coming off a first round knockout at UFC Vegas 12 where he earned performance of the night honors. In the victory, Holland landed 33 total strikes and ate just two shots from his opponent. Holland has a chance to win five fights this year, which would certainly put him in elite company and put his name in the hat for fighter of the year. Holland is a lengthy, athletic fighter with an 81-inch reach and impressive standup ability. Holland is light on his feet, constantly moving and not giving his opponent an easy target and has polished boxing skills with quick hands, good footwork and enough power to end things with one clean shot. Holland has produced knockouts in three of his last four victories. A black belt in Kung Fu and BJJ, Holland closes the distance well to land that big shot, and he’s gotten a lot more comfortable on the canvas over the years. Because of his length, Holland can really make life difficult for his opponent once on the ground and he has six career submission victories. This will be Holland’s fifth career fight in Las Vegas.

Ronaldo Souza enters this fight with a 26-8 record and has won 54 percent of his fights by submission. Souza has lost four of his last six fights and is coming off a November (2019) loss to Jan Blachowicz. Souza is averaging 2.54 significant strikes per minute with an accuracy percentage of 46 percent. Souza is averaging 2.46 takedowns with an accuracy percentage of 38 percent. Souza was supposed to fight at UFC 249 but was forced to pull out due to testing positive for COVID-19. Souza is coming off a split decision at UFC Fight Night 164 where his opponent landed more shots overall, but they both landed 41 percent of their significant strikes. Souza just can’t catch a break right now with losses in four of his last six fights, and he hopes to avoid three straight losses for the first time in his career. Souza is most known for his BJJ background and submission wrestling, as the guy is an animal in the clinch and on the canvas, but he has toughness and enough pop in his hands to hold his own standing up. Souza can win a physical standup fight when needed and is more than capable of eating some powerful shots and keep moving forward. However, Souza is in the worst form of his career and he’s coming off  along layoff while also turning 41 years old last week. This will be Souza’s second career fight in Las Vegas.

You can never overlook somebody like Souza, who is a veteran of the sport, a champion and has a decorated BJJ and submission wrestling background. However, Souza also isn't in great form at the moment, is coming off COVID-19 and is now 41 years old. Holland can do no wrong this year, as he already has four wins under his belt and is riding high on confidence. Holland is giving up a nine inch reach advantage in this fight, which can't go unnoticed, but he has the clear athletism advantage and the pop to where he just needs to land one shot to put Souza in a dangerous position.

I can't bet against Holland in this bout.