Justin Jaynes and Devonte Smith are fighting at UFC Vegas 18 on Saturday, February 6, 2021 on ESPN+.

In this catchweight (160lbs) bout, we have Justin Jaynes vs. Devonte Smith. Jaynes is fighting out of Las Vegas, Nevada. He is entering this bout as a +230 underdog. He was brutally knocked out in his last bout against Gabriel Benitez. In his last two fights, he has lost to Gavin Tucker and Gabriel Benitez, but you can’t put too much stock in these losses. Before his losing streak, he was on a five fight winning streak and has notable wins over Frank Camacho, James Warfield, and Brandon noble.  He has a professional MMA record of 16-6-0 and has 8 wins by KO/TKO (50%), 5 submissions (31%), and 1 decision (6%).

Smith is fighting out of Bedford, Ohio. He is entering this fight as a -290 favorite. Smith lost his last bout to Khama Worthy. Before his last loss, he was on a six fight win streak and has notable wins over Dong Hyun Ma, Julian Erosa, Joseph Lowry and Justin Edwards. He has a professional MMA record of 10-2-0 and has 9 wins via KO/TKO (90%), 1 submissions (10%), and 0 decisions (0%).

Jayne is known for being a headhunter and true brawler, however, I think Smith will be able to outclass him while standing up. As long as smith can avoid the dangerous an explosive power of Jayne, he will win this fight. Smith is more well-rounded and is fast and elusive on the feet. Smith’s fights have never gone to decision and Jayne’s fights have only gone to decision one time. While I don’t see this fight going the distance, I predict this fight will end late in the second or early in the third round. Yes, Smith will win this fight, but there is no value as a -290 favorite. The value is in a prop bet. For these reasons, my pick is... 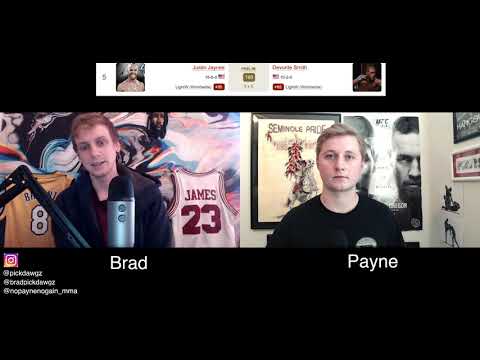