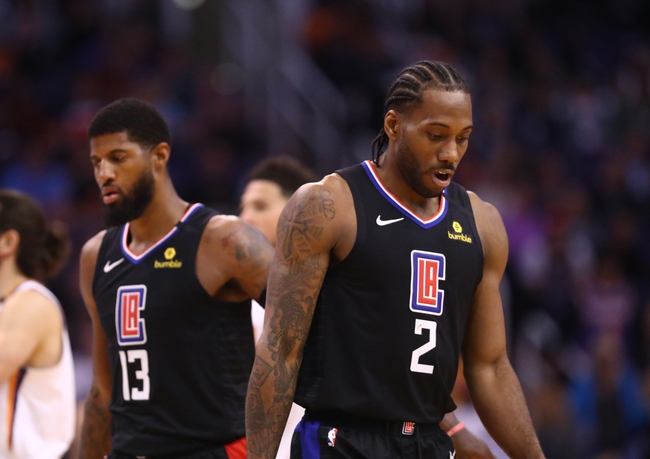 The Los Angeles Clippers hope to contend for thee NBA Championship when the season resumes in July.

The Los Angeles Clippers entered the season as a legit title contender, and they entered the break with wins in seven of their last eight games and a 44-20 record. The Clippers were fifth in the league with an average fo 116.2 points and third in rebounds with 48 per game. Defensively, the Clippers were third in the league allowing just 43.6 percent shooting from the field and second with an allowed 34.1 percent shooting from deep. Needless to say, the Clippers are one of the more balanced teams in the league and still a serious threat to leave Florida with the hardware. Get NBA Picks and NBA Predictions for EVERY GAME at Sports Chat Place.

Let’s give a quick breakdown of the Clippers remaining schedule and how the break impacts the squad moving forward as we gear up for NBA playoff basketball in Orlando.

Roster Update: The Clippers are one of the healthiest teams returning, as Terance Mann is the only player on the current injury list. Mann had hand surgery in mid-May to repair a torn ligament and there was no timetable for his return. Considering Mann averaged only 7.7 minutes per game this season, I’m not sure his progress is the biggest concern at the moment.

Help Or Hurt: You can argue both sides for the Clippers in this spot, as the break does give Paul George and Kawhi Leonard more time to rest and build confidence for larger workloads. Remember, both PG13 and Kawhi were on serious load management this season and it prevented the Clippers from gaining consistent chemistry and led to some questionable losses. On the other side, the break prevents new players Marcus Morris Sr. and Reggie Jackson from finding their place in the depth chart. Morris has 12 starts with the Clippers and is going to be a key peice moving forward, while Jackson is the backup point guard and has played in just 23 games all season long. Those two guys will have to find their way on the fly, as there’s limited reps before the playoffs.

Potential Seeding: The Clippers are currently in the second seed, and they’re 5.5 games behind the Los Angeles Lakers for the top spot and just 1.5 games ahead of the Denver Nuggets for the third seed. The first seed in the West is likely not an option, but the Clippers could fall as low as the sixth seed if they completely fall on their face out of the gate. While home court is no longer an issue, you can expect the Clippers to play for the second seed and grab one of the weaker opponents in the first round. A Clippers - Dallas Mavericks first round matchup is much more comfortable than a meeting with the Oklahoma City Thunder or Houston Rockets.

Odds: The Clippers are +200 to win the West and +300 to win the NBA title. The only team that has better odds in both spots is the Los Angeles Lakers. Honestly, if you liked the Clippers before the season, you should like them even more now because there’s no more home court advantage with every game taking place in Orlando. Before, the Clippers would have likely played the Lakers at some point in the playoffs and every contest would have been a Lakers home game at the Staples Center. While this situation isn’t easy for anybody, it does benefit the Clippers greatly and in terms of depth, they’re the best roster in the league. I’d put money on these odds and the Clippers would be my pick to win it all if you put a gun to my head.