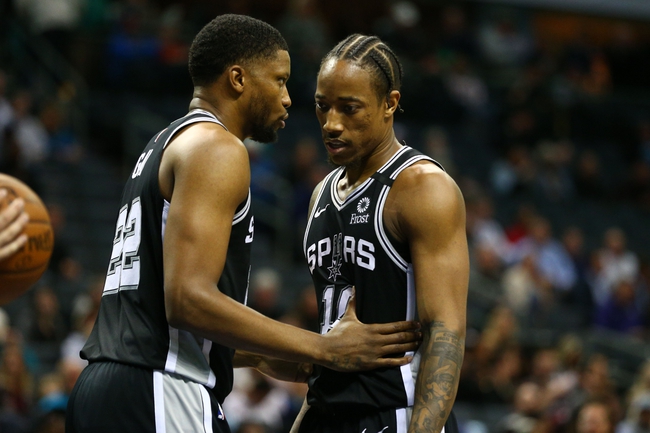 The San Antonio Spurs have made the playoffs in each of the last 22 years and have a chance to keep the streak alive when the NBA season returns in July.

The Spurs split their last 10 games before the hiatus and really struggled to find consistency. The Spurs were a solid offensive team, but the issue was on the defensive side where they allowed 114.9 points (24), 46.9 percent shooting from the field (21) and 37.6 percent shooting from deep (26). It goes without saying that the Spurs must play better if they’re going to sneak into the playoffs. Get NBA Picks and NBA Predictions for EVERY GAME at Sports Chat Place.

Let’s give a quick breakdown of the Spurs remaining schedule and how the break impacts the squad moving forward as we gear up for NBA playoff basketball in Orlando.

Roster Update: The Spurs will be without LaMarcus Aldridge who had work done to his shoulder a couple weeks ago. Aldridge is expected to be fully recovered for the 2020-21 NBA season. Dejounte Murray suffered a calf injury before the break, but he’s expected to be ready by the time the season returns. Lonnie Walker missed the Spurs final two games due to shin splints, but he’s another player who will be 100 percent in Orlando.

Help Or Hurt: Losing Aldridge for the remainder of the season certainly doesn’t help the Spurs, as he was the teams second leading scorer and top rebounder. However, it was likely that Aldridge was going to have the operation with or without the Coronavirus throwing a monkey wrench into the season, so I’m not sure the break played a deciding factor. Other than losing one of their best players, the break should help the Spurs. We’re talking about a Spurs team that couldn’t get stops defensively and looked lost most nights. The break allows guys to recharge the batteries a bit and get back to playing Spurs basketball. The Spurs can’t possibly play worse than what we previously saw based on their standards, so maybe the break was a good thing for this club.

Potential Seeding: The Spurs are either going to miss the playoffs for the first time since 1996-97 or they’re going to sneak in as the eighth seed. The Spurs are currently four games behind the Memphis Grizzlies for the eighth seed and need to stay within that amount to at the very least earn a play-in game. Despite all the issues this season, the Spurs still control their own destiny to keep the postseason streak alive.

Odds: The Spurs have odds of +30000 to win the West and +50000 to win the NBA title. I love massive future odds, but there’s no value in betting these options despite the life changing potential payout. The Spurs aren’t good defensively and are now down one of their best players. Out of all the teams the Los Angeles Lakers could play in the first round, they would welcome a matchup with the Spurs probably more than any other team. This just isn’t a good Spurs team and they likely don’t even make the playoffs for the first time since Un-Break My Heart from Toni Braxton was on the music charts.