The Miami Heat and Los Angeles Lakers begin the 2020 NBA Finals on Wednesday, and it’s only right we breakdown position by position to come away with a series prediction.

Point Guard: Goran Dragic has turned back the clock since joining the bubble, as he’s averaging 20.9 points and 4.7 assists in 15 playoff games while shooting 45.2 percent from the field and 36.3 percent from three. A lot of nights, Dragic has been the Heat’s best player, and he’s provided a ton of relief points to keep Miami in games when the offense gets a little sluggish. The Lakers don’t start a true point guard in these playoffs and it’s often LeBron James with the ball in his hands, and he’s averaging 8.9 assists through 15 playoffs games. While it’s not a matchup we’ll see head to head, if we’re talking about the Heat’s starting point guard against the Lakers “point guard”, you’d have to give the edge to LeBron.

Shooting Guard: Duncan Robinson has established himself as one of the top three-point shooters in the NBA, as he made 270 threes in the regular season, and he’s shooting 40 percent from deep in the playoffs on 7.3 attempts. While Robinson has had issues getting open since the Milwaukee Bucks series, him just being on the court and forcing so much attention from opposing defenses makes life easier on his teammates. Kentavious Caldwell-Pope is a big, lengthy defender at the shooting guard position and while he’s not the most explosive scorer, he’s shooting 42.1 percent from deep in these playoffs and has chipped in 10 or more points in six of his last seven games. KCP is an underrated player on this Lakers squad, but Robinson is an elite specialist and a game changer if left open.

Small Forward: Jimmy Butler is averaging 20.7 points, 5.7 rebounds, 4.5 assists and 1.9 steals in these playoffs. While Butler could be more aggressive offensively at times, he has a great feel for his team and does a lot of the little things that you don’t find in a boxscore. Danny Green provides experience and can get hot from deep, but he’s been a bit underwhelming in these playoffs. Green is shooting 36.4 precent from deep on 5.1 attempts and averaging 8.1 points in 25.8 minutes. Green shot 32.7 percent from long range against the Denver Nuggets, proving he just isn’t the threat he was a few years ago. Butler is head and shoulders the better player here and does way more at both ends that impacts winning.

Power Forward: Jae Crowder was a knockdown shooter against the Pacers and Bucks, but he’s coming off a rough shooting performance against the Celtics, and that includes 35.7 precent from the field and 23.3 percent from three. The good news for Heat fans is Crowder still sets hard screens, rebounds and has consistently taken on some of the toughest defensive matchups and held his own. While LeBron gets a lot of the credit for the Lakers success, Anthony Davis is leading the charge with 28.8 points per game with 9.3 rebound and 3.6 assists. Shooting 57.1 percent from the field, Davis has dominated the playoffs up to this point and even saved the Lakers with that last second shot in game two against the Nuggets. Davis has made his mark in the postseason and isn’t a sidekick by any means.

Center: If you weren’t aware of Bam Adebayo before the playoffs, you know him now after what he did to the Celtics. Not only did Adebayo stuff Jayson Tatum in game one of the playoffs to secure the victory, but he took over the fourth quarter of game six to send the Heat to the NBA Finals. Adebayo is one of the top defenders in the league, capable of defending one through five, and he’s finally starting to gain confidence offensively and being more aggressive. Adebayo is only going to get better with a little more seasoning. A combination of JaVale McGee and Dwight Howard has given the Lakers more cushion on the glass and easy put backs at the rim. There’s been moments where Howard has taken over at both ends of the floor for several possessions. Still, Adebayo’s defensive versatility makes him the clear winner in this spot.

Bench: The two best bench players for the Lakers these playoffs have been Alex Caruso and Kyle Kuzma, and we’re starting to see flashes of playoff Rajon Rondo, who is averaging 7.2 assists and has knocked down some big threes. Throw in Markieff Morris and his defense, and the Lakers have an OK bench but very few players who are scaring the opposing teams second unit. The Heat entered the bubble as possibly the deepest team in the league but the rotation has shrunk over time. The only players getting consistent minutes off the bench are Andre Iguodala and Tyler Herro. We’re likely going to see some Derrick Jones Jr. minutes due to his defense, Kelly Olynyk should get some run with his size and shooting, and there’s a case to be made for Meyers Leonard to battle the Lakers on the glass. Herro is the best bench player out of all these names, and the Heat still have more playable options at the end of the day. I still lean Miami in this spot.

Series Prediction: The Lakers have the top-two players in this series and while the rest of their team is full of guys you don't know what they're going to produce from game to game, they seem to always find another guy or two to step up. The Lakers should be the favorites in this series. However, the Heat are the deeper team, have the better shooters, have a player in Adebayo who can give Davis a hard time and several players to throw at LeBron. From Butler, DJJ, Crowder and Iguodala, somebody who has faced LeBron a million times in the finals, can all take turns making life difficult for the King. There’s also the Erik Spoelstra factor, a coach who has not only established himself as the best coach in the NBA, but got the best out of LeBron in four years and should be able to form a game plan on how to prevent him from completely taking over. There’s a path for the Heat to pull off the upset here.

Give me the Heat and the +280 odds, and I’ll predict a six game series.

The pick in this article is the opinion of the writer, not a Sports Chat Place site consensus.
Previous Pick
Miami Heat vs. Boston Celtics - 9/27/20 NBA Pick, Odds, and Prediction
Next Pick
Game 1: Los Angeles Lakers vs. Miami Heat NBA Finals Picks, Predictions 9/30/20 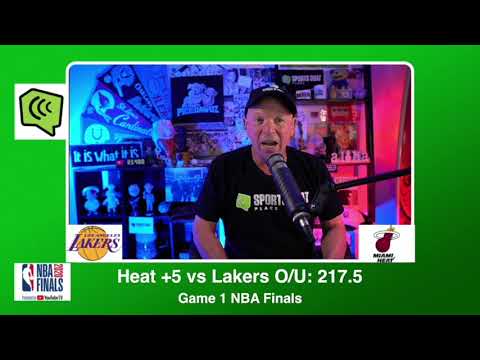