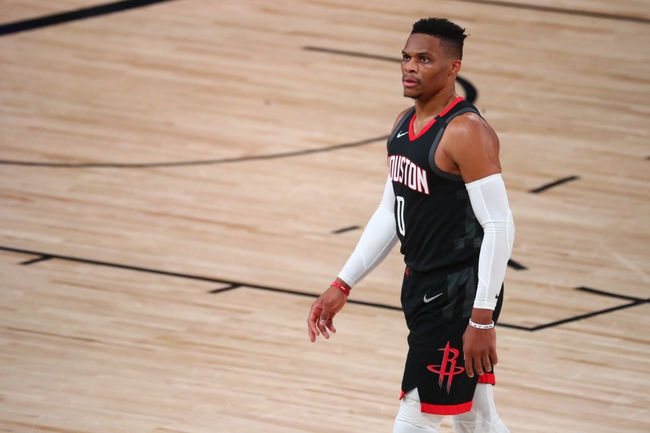 There’s reports that Russell Westbrook wants out of Houston and is essentially demanding a trade.

Westbrook is not happy with the Rockets style of offense, doesn’t feel comfortable with the fit and wants to play for a team where the offense kind of runs through him. Westbrook’s contract is on the pricey side for the next three years and he didn’t perform well in the playoffs, so there’s reasons to be down on him if weighing him as a trade candidate.

Either way, here are five teams that could make a trade for Westbrook this offseason.

New York Knicks - The New York Knicks seem to be one of the better fits for Westbrook, as they don’t have a whole lot going for them and that’s been the case now for decades. Westbrook would be able to call the Knicks his team, play in a mega market and be allowed to do whatever he wanted offensively like he did his last couple years in OKC. The Knicks would get a player with a star name, something they haven’t had in ages. Regardless of the basketball fit, the Knicks need something to wake the fans up.

Milwaukee Bucks - There’s better trades the Milwaukee Bucks can make this offseason, but there’s no doubt they’re in the market for a point guard. The Bucks have been linked to Chris Paul as well. Assuming that doesn’t fall through, Westbrook could be the next option, and I still think he’s an upgrade over Eric Bledsoe. The Bucks need to do whatever they can to keep Giannis Antetokounmpo around and could eventually be pressured into a panic move. I wouldn’t make this trade personally, but I wouldn’t rule it out given the Bucks need to upgrade their roster with that Greek Freak free agency clock ticking.

Phoenix Suns - The Phoenix Suns are another team that’s in the market for a point guard and there’s reports they’re trying to snag CP3. The Suns have been used for leverage in the past, so we’ll see how that goes. The addition of Westbrook gives Devin Booker his best running mate he’s had since entering the league and gives the Suns a veteran presence on this young roster. Westbrook fits the Suns run and gun style, and he’d make this team a lot of fun to watch. This addition would turn the Suns from a decently cute team in the West to a legit playoff contender.

Los Angeles Clippers - Westbrook would certainly welcome this move with him being from the Los Angeles area. The Clippers need a point guard, as Patrick Beverley just isn’t starting quality with his offensive limitations. Westbrook and Paul George already have chemistry with their playing days back in OKC, and he’d be able to take some of the scoring pressure off of Kawhi Leonard. This move gives the Clippers a legit Big Three and strengthens their chances to make a run at an NBA title.

Detroit Pistons - The Blake Griffin honeymoon has worn off and the Pistons are back to being a dreadful franchise that has little direction and no excitement. The Pistons could make this move simply to do right by Griffin and trade him to a better situation while also injecting a flashy, exciting player into their franchise. Westbrook would at least sell tickets (when fans can return, of course) and make the Pistons somewhat watchable. The Pistons have made the playoffs just twice in the last decade. Having Westbrook chase triple doubles and go for 50 points makes the Pistons a little more relevant.