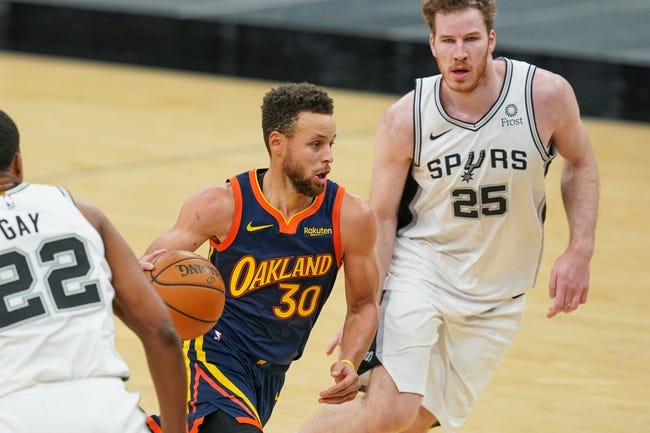 The Orlando Magic and the Golden State Warriors duke it out at the Chase Center on Thursday night.

The Orlando Magic have been in a real funk lately as they've lost six of their past seven games and they will be hoping to avoid a third straight defeat after getting stopped by the Trailblazers in a 106-97 road loss on Tuesday. Nikola Vucevic led the team with 27 points, 15 rebounds and four assists, Terrence Ross added 22 points off the bench while James Ennis chipped in with 16 points on five of nine shooting. As a team, the Magic shot just 42 percent from the field and 11 of 35 from the 3-point line as they fell behind by 17 points early and never looked threatening after scoring just 19 points in the first quarter. To add insult to injury, Cole Anthony left the game after just 14 minutes with a shoulder sprain and he is listed as questionable for Thursday.

Meanwhile, the Golden State Warriors have been in decent form lately as they've split their last eight games and they will be looking to stay hot after making light work of the Spurs in a 114-91 road win on Tuesday. Stephen Curry led the team with 32 points on 11 of 20 shooting, Eric Paschall added 15 points, Andrew Wiggins scored 14 points while Draymond Green racked up six points with seven rebounds and 11 assists. As a team, the Warriors shot 46 percent from the field and 17 of 40 from the 3-point line as they found themselves deadlocked at halftime, before taking over in the third quarter where they blew the Spurs out by 36-20 to win easily in the end.

Head to head, the under is 6-2 in the last eight meetings overall and the Magic are 11-5 ATS in the last 16 meetings in Golden State.

The Magic have been an absolute mess lately and they will be further shorthanded as Anthony could be sitting out this one with a shoulder sprain, while the Warriors are starting to heat up and they will be looking to build on their blowout win over the Spurs in their last outing. The Warriors are 6-1 ATS in their last seven games against a team with a losing record and I think they can build on that trend with another win and cover here.