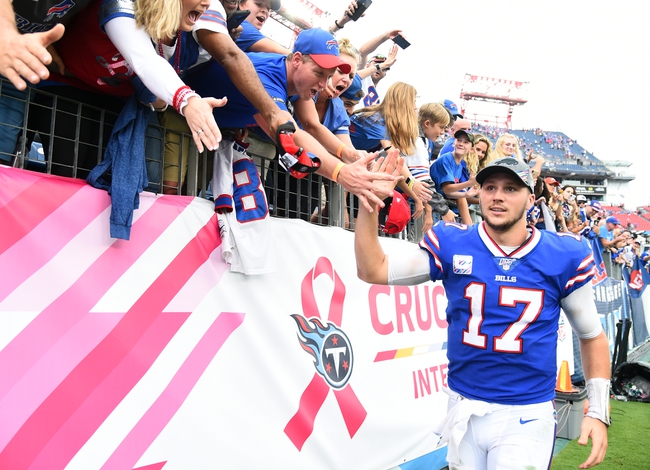 The Buffalo Bills and Tennessee Titans face off in a Week 5 NFL showdown at LP Field in Nashville. This game was pushed back because of a COVID outbreak with the Titans.

The Buffalo Bills have gotten out to quite the start this season currently sitting with a 4-0 record and they have covered the spread in three of the four games. Each of the last three games have been decided by seven points or less, but they have come away with victories in each of the games. The Bills offense has been elite this season led by quarterback Josh Allen who has thrown for 1,326 yards, 12 touchdowns, and one interception. Wide receiver Stefon Diggs has also had a big year catching 26 passes for 403 yards and two touchdowns. The Bills also look like they will be getting back Zack Moss who was out the last two games with a toe injury.

On the other side of this matchup is the Tennessee Titans who have dealt with a COVID outbreak this season and there has to be some questions about how they are going to come out in this game. This is a team that currently have 12 players who are out indefinitely as they sit on the COVID list. Some players expected to miss this game include MyCole Pruit, Corey Davis, Khari Blasingame, Adam Humpries, Jeffery Simons, and Kristian Fulton. In this game some of the young receivers are going to need to step up and give Ryan Tannehill’s target. One good thing for the Titans is Taylor Lewan who is expected to play after dealing with a shoulder injury. On the season the Titans are averaging 26.7 points per game while giving up 24.7 points.

The Titans are without a lot of players and the lack of practice is going to really hurt them. Look for the Bills offense to run up the score, The Titans won’t be able to keep up, and the Bills will win this game and cover the spread.

The pick in this article is the opinion of the writer, not a Sports Chat Place site consensus.
Previous Pick
Tennessee Titans vs Buffalo Bills NFL Pick and Prediction Tuesday 10/13/20 Week 5 NFL
Next Pick
Le'Veon Bell Released: Five Teams To Sign New York Jets Running Back