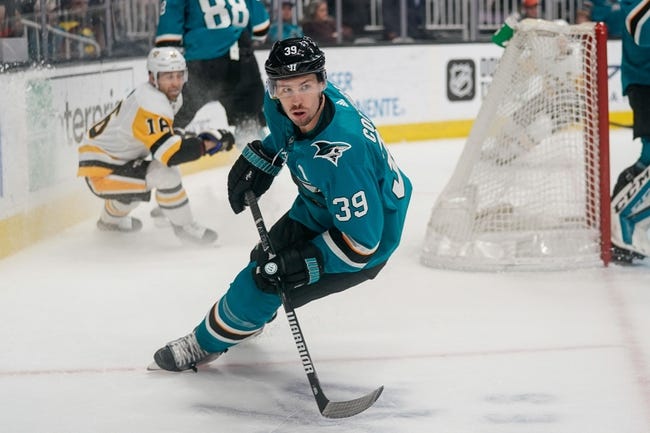 The San Jose Sharks and the Arizona Coyotes meet in NHL action from Gila River Arena on Thursday night.

The San Jose Sharks come into this season looking to shake off one of the worst seasons in recent memory for San Jose, finishing last in the Western Conference with 63 points and a 29-36-5 record, missing out on the playoffs for the first time since 2014-15 and just the second time in the last 17 years. Timo Meier’s back after leading San Jose with 49 points with 22 goals and 27 assists while leading goalscorer Evander Kane is under contract after leading the Sharks with 26 goals last season, but there is word out that he may opt-out of the season due to off-ice matters. The Sharks also retain their captaincy core of Logan Couture, Brent Burns, Erik Karlsson and Tomas Hertl while bringing in Devan Dubnyk to goaltend alongside Martin Jones for the upcoming season after Jones posted a 17-21-2 mark with a 3.00 GAA for the Sharks last season.

The Arizona Coyotes come into the 2021 season looking to improve on an up and down 2019-20 season that saw the ‘Yotes finish 5th in the Pacific and 11th in the West, a far cry from actually leading the Pacific division at one point in December, but the expanded playoffs gave the Coyotes their first playoff spot since 2011-12 and their first series win since 2012, defeating the Predators in the play-in round, but the stay in the bubble was short-lived as Arizona was taken down by Colorado in five games in the following round. The Taylor Hall experiment in the desert is no more as Hall would be lost to free agency but the Coyotes brought back captain Oliver Ekman-Larsson despite there being a ton of trade rumors after logging 30 points in an injury-shortened 56-game campaign. Nick Schmaltz is back after leading the Coyotes with 45 points and 34 assists last year as is Conor Garland who put up 22 goals to lead Arizona in the scoring department last year. The Coyotes are hoping to have a healthy goalie combo of Darcy Kuemper and Antti Raanta going this year as Kuemper was solid, putting up just a 2.22 GAA but made just 29 starts due to injury and never really regained the form down the stretch, posting a 4-5 record in the playoffs with a 3.47 GAA. Only time will tell if Arizona can prove that they’re really taking steps in the right direction, or if it’s just another year of broken promises for the Coyotes.

This was just a gongshow for the Coyotes basically in all of 2020. The Coyotes fell apart when Kuemper went down, went out without much of a fight in the playoffs against Colorado as it just looked like Arizona ran out of gas, and then had a bunch of off-ice issues that just made the team look really bad. Now the Coyotes have to take the ice and the lone boost that Arizona might’ve gotten with fans in the stands is gone with the world still living with COVID. San Jose was extremely disappointing last year and it’s almost unacceptable with how much talent is really on that roster with the likes of Erik Karlsson, Logan Couture, Brent Burns, Tomas Hertl, and the list goes on and on. I think the Sharks need to come out with purpose to start the year, and when you factor in the amount of success the road team has had in recent years, I think the plus money with San Jose is worth a serious look on opening night.