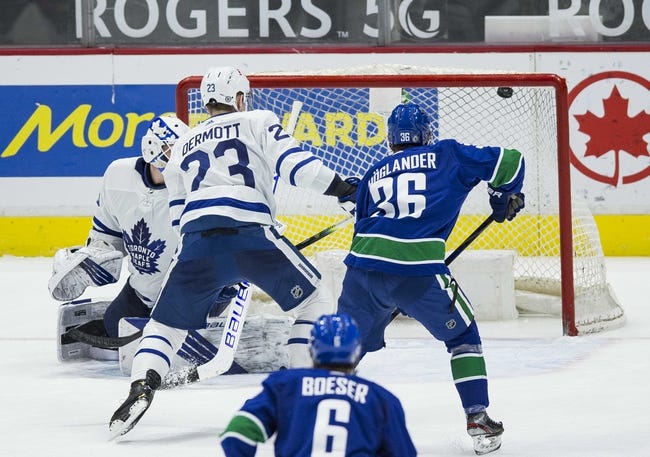 The Toronto Maple Leafs and the Vancouver Canucks meet in NHL action from the Rogers Arena on Saturday night.

The Toronto Maple Leafs will look to bounce back from a 3-1 loss to the Canucks in their last matchup. Mitch Marner leads Toronto in scoring with 34 points including 10 goals and a team-high 24 assists while Auston Matthews has a team-high 18 goals and 13 assists for his 31-point tally this season. John Tavares has 21 points and William Nylander is right behind with 20 points split between 10 goals and 10 assists. Morgan Rielly has 19 points with 16 of those coming via an assist and Zach Hyman and Jason Spezza each have 15 points with Spezza logging 10 assists and Hyman splitting between 7 goals and 8 assists. Frederik Andersen leads the way in goal for Toronto, logging a 12-5 record with a 2.59 GAA on the year in 17 appearances.

The Vancouver Canucks will look for back-to-back wins after their victory over Toronto last time out. Brock Boeser leads the Canucks with 25 points including 12 goals and 13 assists while Quinn Hughes has 22 points with a team-high 20 assists. J.T. Miller and Elias Pettersson each have 21 points with Miller logging 15 assists and 6 goals and Pettersson chipping in 10 goals and 11 assists. Bo Horvat has 17 points with 10 goals and 7 assists and Tyler Myers has 13 points with 10 apples. Thatcher Demko and Braden Holtby continue to split time in goal for Vancouver, with Demko making 16 appearances with a 6-10 record, a shutout and a 2.93 GAA while Holtby is 4-7 with a 3.56 GAA in 11 appearances.

I get why the Canucks and the plus money is tempting after Thursday’s performance. However, a blind squirrel gets a nut every once in a while, and I don’t expect the Leafs to stay down for very long. The Canucks still have issues in goal that one win isn’t suddenly going to solve, so I’ll bank on a bounce back here from the hottest team in the league. I’ll take Toronto -1.5 to get the price down a bit as I think we have a 4-1 game here.