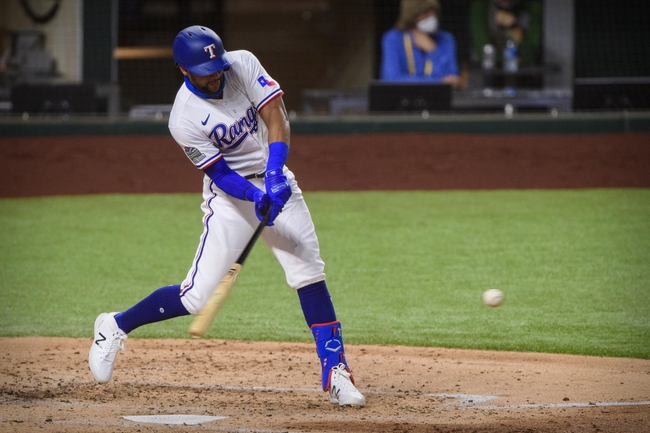 TV: FSSW+, NBCSCA Stream the MLB Game of the Day all season on ESPN+. Sign up now!

The Oakland A’s and the Texas Rangers meet in an AL West division matchup from Globe Life Field on Tuesday night.

The Oakland A’s will try to rebound from a 3-2 loss to Texas in the series opener on Monday. Stephen Piscotty went 2 for 4 with a solo home run while Mark Canha went 2 for 4 with a double and an RBI of his own to round out the scoring for the A’s in the loss. Marcus Semien went 3 for 4 at the dish while Tony Kemp added a base hit as well to finish off Oakland’s offense as a team in the losing effort. Jesus Luzardo took the loss, falling to 2-1 after allowing three runs on seven hits while striking out seven over 6.2 innings of work. Sean Manaea will start here and is 1-2 with a 6.39 ERA and 22 strikeouts this season. In his career, Manaea is 6-2 with a 3.52 ERA and 62 strikeouts against Texas.

The Texas Rangers will look to build off of their series-opening win on Monday. Todd Frazier had two RBIs while Isiah Kiner-Falefa added a solo home run to finish off the scoring for Texas in the win. Danny Santana had a double while Rougned Odor, Robinson Chirinos, Nick Solak and Leody Taveras added base hits each to round out the offense for Texas in victory. Lance Lynn got the win to improve to 4-0 on the year after allowing two runs on five hits while striking out eight over six innings of work. Rafael Montero closed things out for his 6th save of the season. Kyle Gibson will start here and is 1-2 with a 4.73 ERA and 20 strikeouts this season. In his career, Gibson is 3-2 with a 3.92 ERA and 31 strikeouts against Oakland.

Manaea is the only pitcher here that’s trending upwards, coming off of a start where allowed just one run in 5.1 innings. Gibson on the other hand has allowed at least four runs in two of his last three starts and just hasn’t reliable on the mound for some time now. The problem is I’m not paying -170 with Oakland even if they’re the better team as Manaea hasn’t shown me anything consistent to say he’s worth that number. Instead, I’m going to side with the over. The first two innings saw five runs on Monday and we looked like we were going to cruise to the over before the offenses just shut down, but I think the ball flies around the park much easier in this one. Give me the over here.