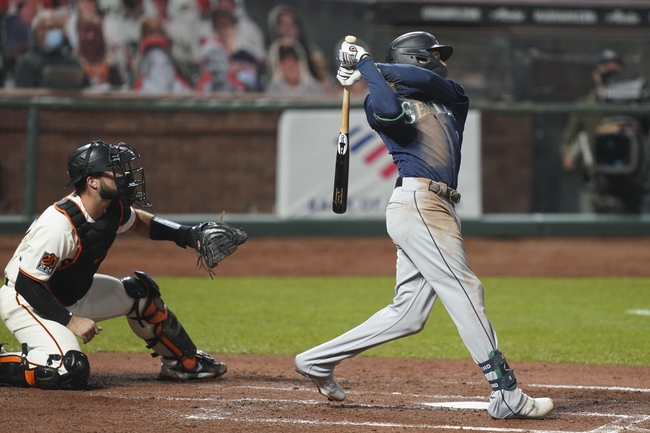 TV: MLBN, NBCSBA, RSNW Stream the MLB Game of the Day all season on ESPN+. Sign up now!

The Seattle Mariners and the San Francisco Giants meet in MLB action from Oracle Park on Wednesday night.

The Seattle Mariners will look to rebound from a 6-5 loss to the Giants on Tuesday. J.P. Crawford had a double and three RBIs while Kyle Seager and Jose Marmolejos each had an RBI as well in the loss. Ty France, Luis Torrens, Evan White and Kyle Lewis all had two hits with France adding a triple and Torrens belting a double, all to round out Seattle’s offense in the loss. Anthony Misiewicz took the loss in relief, falling to 0-2 on the year in relief. Nick Margevicius starts here and is 1-2 with a 3.86 ERA and 23 strikeouts this season. In his career, Margevicius is 1-1 with a 1.64 ERA and 11 strikeouts against the Giants.

The San Francisco Giants come into this game looking to build on their come-from-behind win on Tuesday night. Mauricio Dubon had a two-run home run while Brandon Belt went 3 for 4 with two RBIs. Alex Dickerson and Darin Ruf each had a solo home run to finish off the scoring for San Fran in the win. Donovan Solano went 3 for 4 with a triple and a double while Pablo Sandoval had two hits and Joey Bart added a base hit as well to finish off the offense for the Giants in the victory. Logan Webb allowed five runs on six hits while striking out four over five innings of work, not factoring in the decision. Taylor Rogers got the win to improve to 2-3 on the year while Tony Watson closed things out for his 2nd save of the season. Tyler Anderson will start here and is 1-3 with a 5.18 ERA and 26 strikeouts this season. In his career, Anderson is 0-1 with a 6.55 ERA and 9 strikeouts against Seattle.

Part of me wants to look Seattle’s way as Margevicius has a solid history against the Giants, but Seattle just let one get away on Tuesday and like it or not, San Francisco is playing the better ball between the two sides right now. On the other side of that argument, Anderson’s allowed four earned or more in four of his last five starts. I’ll side with the over here as I think we see double-digit runs on the board once again on Wednesday.