TV: NESN, Bally Sports Sun, ESPN Stream the MLB Game of the Day all season on ESPN+. Sign up now!

The Tampa Bay Rays and the Boston Red Sox meet in MLB action from Fenway Park on Monday night.

The Tampa Bay Rays come into this one on a day off after a 12-7 loss to the Miami Marlins in their last outing. Mike Zunino had a two-run home run while Yandy Diaz went 2 for 3 with a double and two RBIs. Joey Wendle and Manuel Margot each had a 2 for 4 day with an RBI, with Wendle adding a double. Michael Brosseau and Austin Meadows each had a base hit as well to finish off the offense for the Rays in the losing effort. Rich Hill allowed four runs on five hits with four strikeouts over four innings of work, not factoring in the decision. Chris Archer ended up with the loss after allowing three runs on four hits in two innings of relief. Michael Wacha will start here and was 1-4 with a 6.62 ERA and 37 strikeouts with the Mets last season. This will be Wacha’s second career start against Boston.

The Boston Red Sox will look to rebound from an 11-3 loss to Baltimore in Sunday’s series finale. J.D. Martinez led the way, going 2 for 4 with a home run, a double and two RBIs while Kike Hernandez added an RBI to make up the scoring for the BoSox in the loss. Christian Vazquez went 3 for 4 with a double while Christian Arroyo added a base hit as well to cap off Boston’s offense in the losing effort. Garrett Richards took the loss, falling to 0-1 after allowing six runs on seven hits over two innings of work. Nick Pivetta will start here and was 2-0 with a 6.89 ERA and 17 strikeouts between Philadelphia and Boston last season. In his career, Pivetta is 0-0 with a 0.69 ERA and 15 strikeouts against Tampa Bay.

This is a tempting total considering that we had two pitchers with questionable histories and that the over has hit in 6 of the last 8 meetings. The offense has also come alive on both sides more often than not in the opening weekend and I think the over cashes here as well. 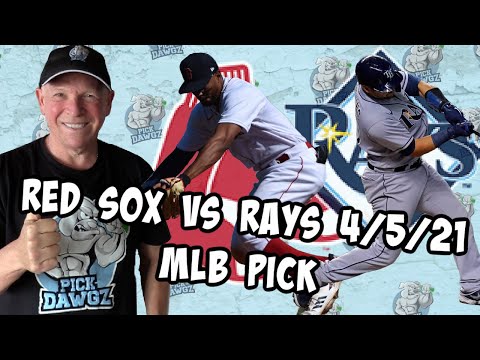