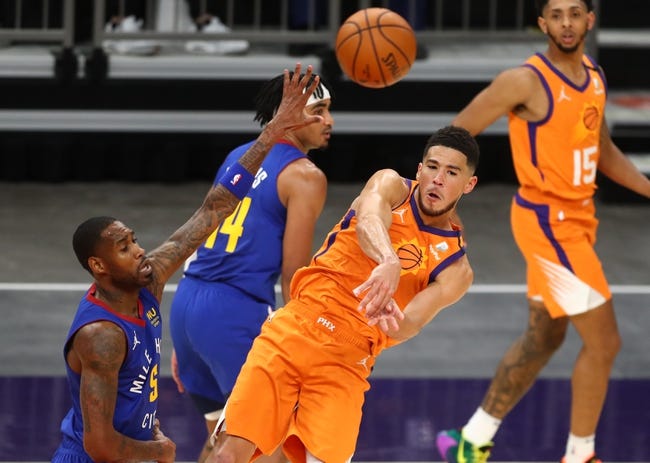 The Phoenix Suns and the Denver Nuggets battle it out for the second time in as many nights at the PHX Arena on Saturday night.

The Denver Nuggets have been in decent form as they’ve won seven of their past 10 games and they will be aiming for a third straight win after last night’s 130-126 overtime win over the Suns. Nikola Jokic led the team with 31 points, 10 rebounds and eight assists, Gary Harris added 19 points, Jamal Murray scored 18 points with nine assists while Will Barton and Monte Morris each scored 17 points. As a team, the Nuggets shot 51 percent from the field and a miserly six of 26 from the 3-point line as they struggled in the first half and fell behind by as many as 14 points, before taking over the game in the second half where they outscored the Suns by 60-46. The Nuggets held the momentum going into overtime and they were good enough to escape with the narrow win in a game that could’ve easily gone either way.

Meanwhile, the Phoenix Suns have cooled off a bit after a hot start to the season as they’ve lost three of their last four games and they will be hoping to get back in the win column after last night’s tough loss. Devin Booker led the team with 31 points and five assists, DeAndre Ayton added 27 points with 13 rebounds on 11 of 13 shooting, Mikal Bridges scored 24 points with 10 rebounds and four assists while Chris Paul chipped in with 11 points and 15 assists. As a team, the Suns shot 50 percent from the field and 17 of 44 from the 3-point line as they looked to be in control for most of the game, but they went scoreless in the final two minutes of regulation and it cost them as the Nuggets never relented after stealing the momentum.

The Nuggets looked down and out for most of last night’s contest, but they hung in the contest and reaped the rewards as they were able to escape with the win. The Suns will be so disappointed after seemingly having full control of the game, so I expect a strong response from them in this outing. The Suns are 9-1 ATS in their last 10 home games and I think they can build on that trend with another win and cover here.