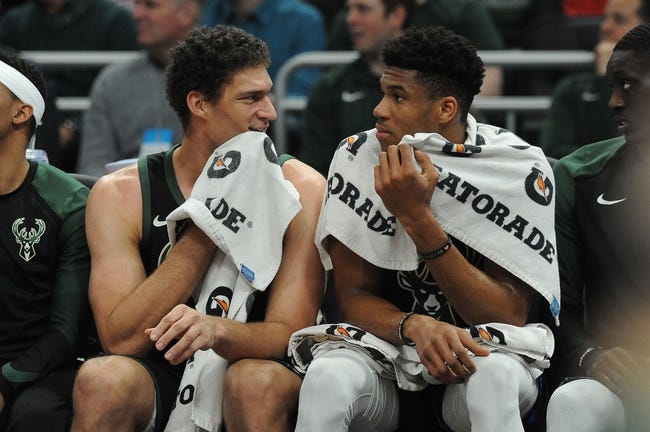 The Denver Nuggets pay a visit to the Milwaukee Bucks at the Fiserv Forum on Tuesday night.

The Denver Nuggets have been in decent shape as they’ve won six of their past 10 games and they will be looking to stay hot after blowing past the Thunder in a 126-96 road win on Saturday. Jamal Murray led the team with 26 points and five assists, Michael Porter Jr. added 20 points with 10 rebounds while Nikola Jokic racked up a triple-double of 19 points with 11 rebounds and 13 assists. As a team, the Nuggets shot 55 percent from the field and 15 of 31 from the 3-point line as they set the tone with 38 points in the first quarter to open up an early double-digit lead, before pushing the lead out to as many as 37 points in the third quarter to put the game to bed early.

Meanwhile, the Milwaukee Bucks have been building nicely as they will be looking to extend their current five-game win streak after outlasting the Clippers in a 105-100 home win on Sunday. Giannis Antetokounmpo led the team with 36 points with 14 rebounds, five assists and four blocks, Khris Middleton added 19 points with eight assists while Donte DiVincenzo chipped in with 11 points. As a team, the Bucks shot 44 percent from the field and 12 of 38 from the 3-point line as they looked to be in trouble after falling behind by seven points early in the fourth quarter, before they closed the game on a 9-0 run in the final 2:35 to escape with the impressive win.

The Nuggets haven’t been at their best lately, but they sure looked pretty good in their dominant win over the Thunder on Saturday while the Bucks are coming into this one riding a five-game win streak after beating the red-hot Clippers on Sunday. The Nuggets still have a longer injury list compared to the Bucks but Jokic has been on fire this season while Murray is starting to heat up. However, the Bucks are 4-1 ATS in their last five home games and I think they can keep their streak alive with another win and cover here.