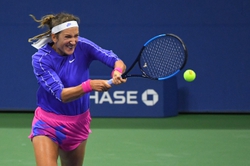 It is the clash of powerhouses as Serena Williams meets Victoria Azarenka in the semifinals of the 2020 US Open on Thursday, September 10th 2020. Will Williams make yet another Grand Slam final in her chase to win her 24th career major, or will Azarenka spoil the party?

Serena Williams fought extremely hard yesterday to win against Pironkova in the quarterfinals, coming back from a set and a break down to win the match in three sets. Williams is not the player she used to be, but the respect and the fear that her opponents have for her on the court is still very real. Williams has won many matches here at the US Open just because of that fear. But here we are in the business end of the tournament and if Serena Williams does not bring her A-game from the start of matches, she will not be pleased with the results which follow.

Victoria Azarenka has been superb here at the US Open, being one of the most dominant players in the field. Azarenka has a great serve and is not afraid to back herself in tight moments. Azarenka absolutely destroyed Elise Mertens in the quarterfinals, only losing one game. Azarenka will know she can make it to the final here in New York and she will not be afraid to give it her all in her quest toi beating Serena Williams and winning the 2020 US Open.

This is going to be a very important clash between both players as they have met twice in the US Open Final in both 2012 and 2013, both of which Serena Williams won. This will be the 23rd meeting with Serena Williams leading 18-4. I think that Azarenka gets her revenge here for all those losses as she is the better player at the moment. Williams is far from her best and I just do not see her winning this match after her last two sloppy matches which she only won due to the fear her opponents had because of William's name and career. Azarenka has her number here and she will book her spot in the US Open final.