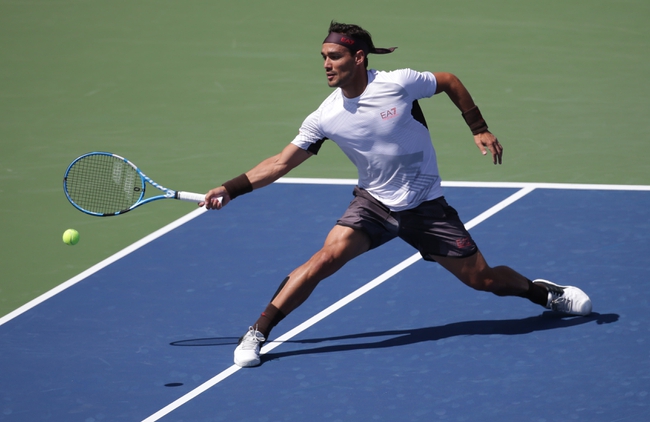 Fabio Fognini is back in Rome and he is here to play Ugo Humbert in their second-round encounter on Wednesday, September 16th 2020. Will Fognini drastically improve from his poor performance last week, or will the up and coming Frenchman take this match in his hands?

Fabio Fognini really disappointed me last week in Kitzbuhel, losing his first-round match in straight sets without even trying to hold his serve. Fognini just did not seem interested in doing anything in that match and I am not sure whether that was just laziness or whether he was not feeling at 100% with that being his first match back after ankle surgery. I expect if it was laziness that Fognini will put a lot more effort in here as he is playing in Italy, however, we won't know until the man himself steps onto the court on Wednesday.

Ugo Humbert had a great start to 2020 and he will be looking to have another solid start to his clay court season here in Rome. Humbert put on a solid performance against Kevin Anderson in the first round, absolutely dominating the South African in straight sets. Humbert has a lot of potential and in my opinion he will be very hard to beat in a few years once he develops his game a bit further. I expect Humbert to come out here and give it his all once again and put on a solid performance against Fabio Fognini.

This is going to be the first meeting between both players and I expect this is going to either be an extremely tight encounter, or an absolute domination by Ugo Humbert. Fabio Fognini seemed lazy last week in his match in Kitzbuhel and I cannot back him to win here. I can potentially see him putting up more of a fight, but Humbert has spent more time on the court and will be feeling more confident than the Italian. Humbert is in better form at the moment, and I think Fognini needs to prove to us a bit more that he is here to play if I am to back him.