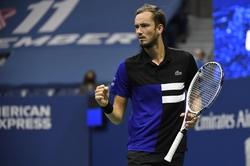 Daniil Medvedev makes his 2020 debut on the clay after putting on a solid performance at the US Open, reaching the semifinals. Medvedev meets that is going to be a tough opponent in Ugo Humbert who has played quite well on the clay in the last week.

Ugo Humbert was playing very well on clay in Rome and he potentially could have made the quarterfinals when he played Denis Shapovalov. Humbert won that first set against Shapovalov and it looked like it was going to be a tough ask for the Canadian to come back and win that match. However, Humbert starting hitting more and more unforced errors and allowed Shapovalov to dominate the match. Humbert is a very talented prospect in the world of tennis, he just needs to continue to better his game and get matches under his belt to prepare himself for any type of situation.

Daniil Medvedev put on a solid performance at the US Open, reaching the semifinals only to lose to the eventual Champion, Dominic Thiem. Medvedev had not lost a set until the semifinals and it shows us that his determination is back and he will definitely want to get himself ready to compete at his best on the clay for Roland Garros next week. Medvedev is a very solid player on clay and he will definitely come out here to get a few wins under his belt, perhaps even the title, and make sure he is ready for next week.

This is going to be the first meeting between these two players and it is going to be a tight one for sure. Medvedev has not competed on clay in a while, whilst Humbert has. This may not be the best start for Medvedev in this match as he will be getting a feel for the courts initially, but once he does that, I think he will run away with the match. This leaves the door open for Humbert to perhaps steal the first set, but nonetheless, Medvedev will eventually get his timing right and length of ball correct and win this match.