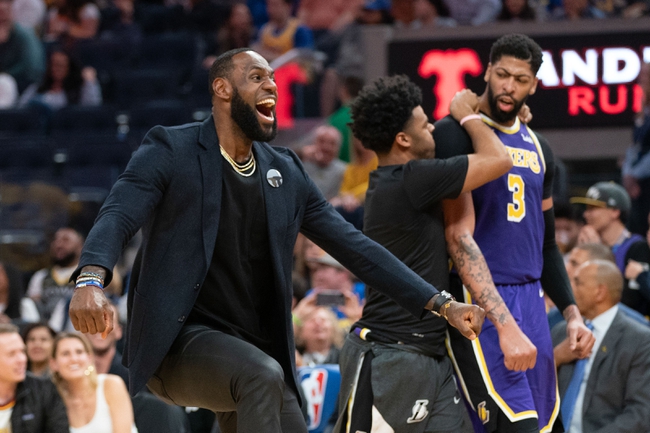 The Los Angeles Lakers hope to win their first NBA title since the 2009-10 season when the season resumes in July.

The Los Angeles Lakers have been the favorites from the start of the season to win the NBA title and nothing has changed with them sitting at a 49-14 record and the first seed in the West. The Lakers are first in the league with a 48.5 percent shooting percentage and are third in the league with an allowed 106.9 points per game. The Lakers get it done at both ends of the floor and appear to be the team to beat as August rolls around. Get NBA Picks and NBA Predictions for EVERY GAME at Sports Chat Place.

Let’s give a quick breakdown of the Lakers remaining schedule and how the break impacts the squad moving forward as we gear up for NBA playoff basketball in Orlando.

Roster Update: Talen Horton-Tucker is the only player on the Lakers injury report, as he’s played just two games this season and hasn’t played since late December due to a foot injury. Dion Waiters should be ready to make his Lakers debut when play resumes, but he hasn’t played since late January due to being in the doghouse with the Miami Heat for multiple reasons. It’s going to be interesting to see what type of shape Waiters is in given his history.

Help Or Hurt: The break helps the Lakers given that they’re 100 percent healthy and it’s allowed LeBron James, somebody with a billion miles on his legs, to recharge the batteries. You can also argue the break has hurt the Lakers considering they were rolling and sitting pretty with the top seed in the West, while all fighting with the Milwaukee Bucks for the best record in the league. That’s not only broken momentum, but the Lakers also lose out on likely having home court advantage throughout the playoffs. While the Lakers are an experienced team and led by a guy who has been here done that, I’m going to say Coronavirus hasn’t done the Lakers many favors.

Potential Seeding: The Lakers have a 5.5 game lead over the Los Angeles Clippers for the top seed in the West, meaning they’re all but a lock to finish the eight games with the No. 1 seed and play whoever lands the eighth seed. With such a gap in the standings, the Lakers don’t have to kill themselves heading into the playoffs and can take their time getting back in the swing of things.

Odds: The Lakers are +130 to win the West and +225 to win the NBA title. Personally, I like to get a little more meat on the bone when betting futures, so these odds aren’t for me. In fact, you can probably get a better return when betting the Lakers each series and rolling over your money until they win the hardware. With a combination of LeBron and Anthony Davis, the Lakers should be the frontrunners, but these odds don’t get me out of bed.

The pick in this article is the opinion of the writer, not a Sports Chat Place site consensus.
Previous Pick
Baskonia vs. Barcelona - 6/21/20 Spain ACB Basketball Pick, Odds, and Prediction
Next Pick
Oklahoma City Thunder: NBA Restart 2020 Preview, Prediction, Picks