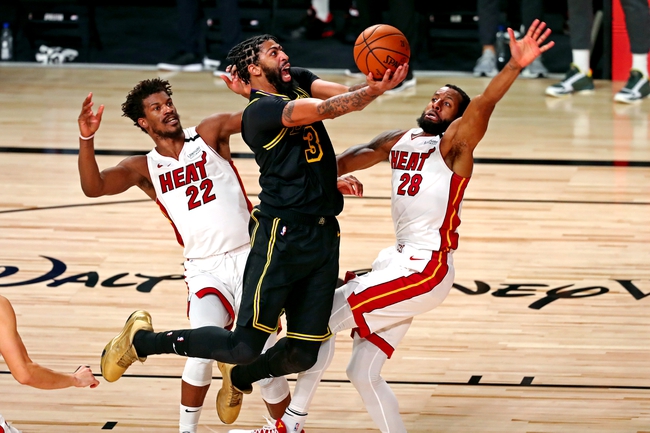 The Los Angeles Lakers and the Miami Heat collide in Game 6 of the NBA Finals at the AdventHealth Arena on Sunday night.

The Los Angeles Lakers will be looking to bounce back and finish the job after getting dropped by the Heat in a 111-108 loss in Game 5. LeBron James led the team with 40 points, 13 rebounds, seven assists and three steals, Anthony Davis added 28 points with 12 rebounds, three assists, three steals and three blocks while Kentavious Caldwell-Pope chipped in with 16 points, but no other player scored more than eight points. As a team, the Lakers shot 46 percent from the field and 14 of 38 from the 3-point line in a close contest that could’ve gone either way, the Lakers just couldn’t make the most of their offensive rebounds down the stretch as Danny Green missed on a wide open shot to win the game, while Davis was unable to impact the game as he limped around the court in the final moments of the game.

Meanwhile, the Miami Heat needed to come out swinging to keep their season alive and they did that in Friday’s win over the Lakers. Jimmy Butler led the team with a triple-double of 35 points with 12 rebounds, 11 assists and five steals, Duncan Robinson drained seven 3-pointers on his way to 26 points, Kendrick Nunn scored 14 points off the bench while Bam Adebayo chipped in with 13 points, four rebounds and four assists. As a team, the Heat shot 45 percent from the field and 14 of 33 from the 3-point line as they squandered an 11-point lead, but they didn’t panic and were able to escape with the narrow win behind the leadership of Butler in the clutch moments. Goran Dragic sat out his fourth game with plantar fascia and he is unlikely to be available on Sunday.

The Lakers went through all the stops to seal the deal in Game 5, but there’s just no quit in this Heat team. LeBron had a monster game of 40 points on 15 of 21 shooting while Davis added 28 points, but the Lakers got next to nothing from their supporting cast which could cost them big if Davis is again limited by the heel contusion he re-aggravated on Friday. The Lakers haven’t lost consecutive games in the playoffs, but the Heat just refuse to go away. I’m tempted to go with the Lakers to bounce back and seal the deal, but the Heat should be good enough to at least take this one down to the wire. Give me the Heat and the points in what should be another close one.